Soccer Chronicles: A Renaissance Man with a Passion for Soccer

The Herzog boys, Willi, Hans, Alex and Mike grew up playing soccer. They started life in Romania and then during the war the family moved to Germany. In those days, the boys played in empty fields and fashioned the balls out of rags tied with string. In the 50's, the family emigrated to the US.

Mike was on Spokane's first soccer team, the Spokane Spokes. Formed in the late 1950's, the team was made up of ex-pats from eastern Europe. They didn't speak the same language, but they all spoke the game of soccer. "I was just a kid of 14. The guys on the team were a lot older, in their 20's. They didn't believe me when I told them that I could play soccer so they started me shagging balls. Then when I proved myself, they moved me into goalie," Mike said. At that time, there were no US teams to compete with so they went to Canada to play. The team got good. They started winning and making a name for themselves. Headlines followed.

Mike's love of the game kept him active as a coach and referee. "My daughter Stefani was six when I coached my first team. Coaching girls was very different for me. Girls are very social. With boys you are always telling them to talk to each other. For girls that comes naturally," he said. "I'll never forget a young girl telling me to give her position to her friend that had not played in the game yet. A boy would never do that," Mike said.

He also coached his son David's team. David was a passionate player through high school and college. "When I coached David's team, the River City Steelers, I was very proud. It was an inspiring group of kids. They were undefeated," Mike said. Yeah, undefeated for 13 years!

In soccer, everything revolves around the ball. Learning how to handle the ball is pivotal. Mike asked his kids to kick the ball throughout the day. Off the field, in the backyard, around town. Everywhere.

Mike went on, "I love team sports. I played tennis in college. But there's nothing like the team experience. Teaching kids how to channel collective energies toward a common goal. When you watch a group of kids come together as a team, it's the most amazing of experiences.

It was hard for Mike to give up the game. So much so, he came out of retirement to coach his grandson Justin's soccer team.

"My philosophy is not to over coach. No yelling plays from the sidelines. Does a director yell at the actors on a stage? When I started coaching you could not make a living at it. It was a calling. It's as much art as it is a science. I coached the kids to react to the moment, to be creative thinkers at play. I still dream about games. My team is down. I am moving down the field and I can see nothing but a sea of kicking feet trying to get the ball. Suddenly, out of nowhere, a pocket opens, and I score," Mike reminisced. That's what happens when you go everywhere with the ball. You learn to control it even in your dreams.

Spokane Spokes 1959 - "This was taken on the Gonzaga University campus where the Foley Library now stands. The third from the left and fourth from the right are my brothers." 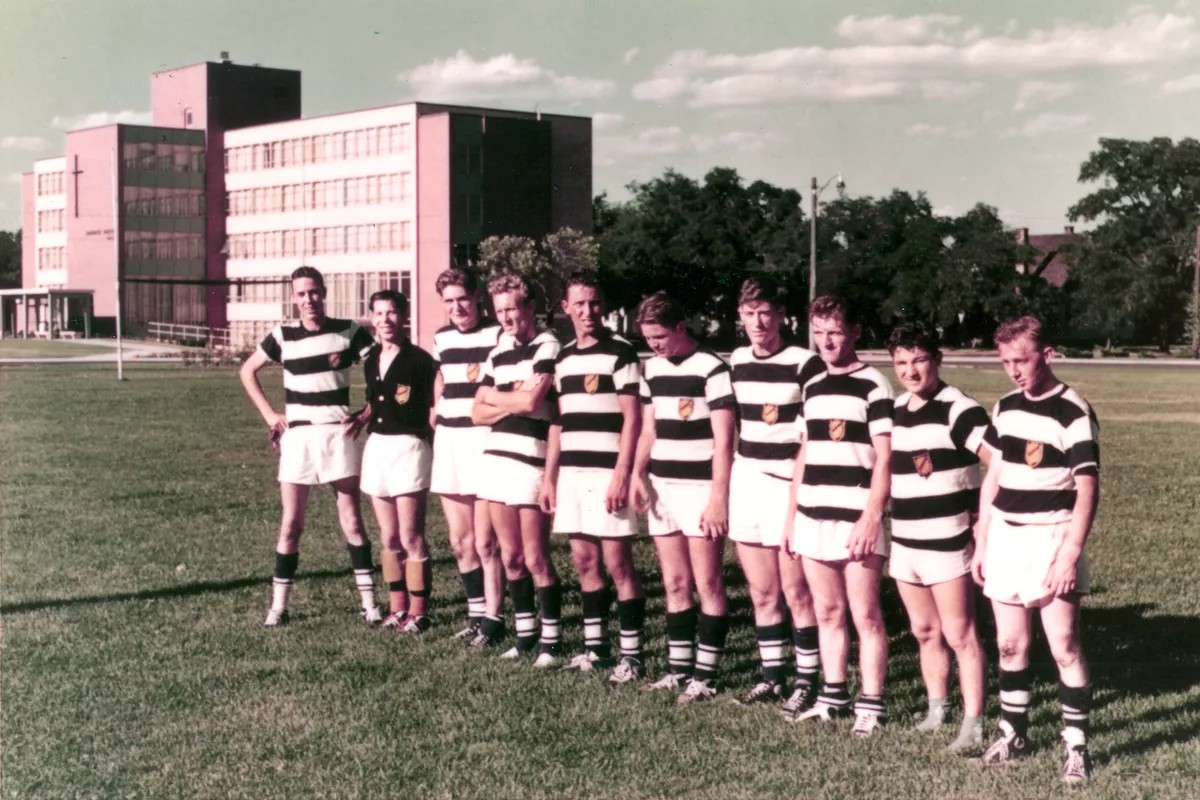 Mike earned a PhD in Comparative Literature from the University of Washington and spent forty-five years as a professor and administrator at Gonzaga University. A Danforth Fellow, he won numerous teaching awards, has written scholarly articles and two plays based on medieval poems, and served as Chief of Staff to the President of Gonzaga. While he was teaching the poetry of Geoffrey Chaucer for more than three decades, he became increasingly fascinated with the life and art of this preeminent poet of medieval England. Will Dreamly Arts published Dr. Herzog's novel about Chaucer, This Passing World, in 2019, and now, in 2022, his translation and completion of Chaucer's masterpiece, Pilgrimage: The Only Complete Version of Geoffrey Chaucer's Canterbury Tales. He has just completed a manuscript for a modern retelling of Parzival, a 13th century German grail poem, and is currently working on a vibrant prose version of the 14th century Arthurian romance: Sir Gawain and the Green Knight.

When you subscribe to the blog, we will send you an e-mail when there are new updates on the site so you wouldn't miss them.

Direct Link
" 92d Force Support Squadron - We’ll make a FUNaddict out of you! "